I am very eager to share with you why Naperville Christian Academy is not one choice among many schools, or even one choice among many Christian school, but is entirely different in nature from any educational institution around, certainly any I have ever encountered–and Iʼve seen quite a few. Between our four children, now aged 13-25, we have experienced public school, private Christian school, homeschool, classical co-op and special ed, not to mention both public and private universities with our two oldest. The only thing that has even come close to NCA was the fabulous curriculum I created in homeschool for Kate last year. Unfortunately, I was not qualified to implement it.

A nagging sense of something desperately missing from the educational system in our country, coupled with the fact that two of our children experienced extreme anxiety in public school led me to large amounts of reading in an attempt to understand the nature of the problem. One of the first books I read made this important connection: “What is influential in the higher intellectual circles always ends up in the schools.” I set myself to look at what those higher intellectual circles had been, and were, saying. I found out (and youʼll forgive this gross oversimplification) that over the course of several centuries, the astounding and undeniable advances in science and technology had led many thinkers to argue that only things that could be measured, studied and quantified were real. This meant that all matters pertaining to the spiritual side of man–the ideas of truth, faith, and the soul–were slowly discredited, to be overshadowed by the elevation of measurable facts as the only worthy objects of our attention. My dissatisfaction with the schools now made more sense to me. Let me give you a word picture to further illustrate what I mean.

My family and I were recently in Los Angeles visiting my brother. He took us on a tour of Paramount Studios, with whom he is currently affiliated. Walking through the sets, we came upon a streetscape of New York City, a brownstonelined block complete with curtained windows and blooming planters on the stoops. It looked move-in ready. My brother instructed us to come closer and tap the bricks–plastic. Then he took us to the end of the “street” and we stood facing the side of one of the brownstones. It was about 8” deep and was propped up by thin plywood buttresses. This, I thought, is such a perfect picture of our society and our educational system–an inviting, convincing and beautiful facade with nowhere to go when you open the door, and held up by a large number of weak sticks which are invisible to lookers-on. In terms of education, the inviting facade is the pragmatic and success-driven curriculum that looks inclusive and rational, but excludes any discussion of ideas or the spiritual; the empty room is the bankruptcy of this curriculum in the face of the real questions of real people: “What does my life mean?”; “ How should I live?”; “How can I face pain and death?”; and the thin, yet unseen sticks propping up the whole thing are the mistaken trails of philosophic thought that none of us have ever heard of. Who in this room thinks our society is in good shape? Or that our schools produce a great number of candidates able to evaluate and lead us out of the moral collapse that is everywhere around us?

NCA is the only school I know of that works from an awareness of the philosophical underpinnings of our society and actively prepares a curriculum aimed at restoring wholeness to the way students think about life. To me, this is so exciting and so hopeful that I just want to share it with you all, to help you see what is really happening inside the walls of this little school, and to inspire you to think about what completing an education at NCA could mean not only for your student, but for those he or she touches in the future. If we Christians are meant to be light in the world, we must seek to understand where our collective thinking has gone wrong. Seen in this way, education becomes highly missional and redemptive. There simply is no comparison between this approach and the flat, plastic curriculum of a materialist viewpoint.

Listen to what C.S. Lewis said in 1939 to a group of Oxford students:

If all the world were Christian, it might not matter if all the world were uneducated. But, as it is, a cultural life will exist outside the Church whether it exists inside or not. To be ignorant and simple now–not to be able to meet the enemies on their own ground would be to throw down our weapons, and to betray our uneducated brethren who have, under God, no defence but us against the intellectual attacks of the heathen. Good philosophy must exist, if for no other reason, because bad philosophy needs to be answered.

Lewis saw clearly the pressing need in his day for Christian scholars to think critically about and respond to the tidal wave of secular thought that was washing away the authority of Godʼs truth. Seventy-five years later, it should be obvious to us that this did not happen. Bad philosophy has gone largely unanswered, and its fruits are displayed for all to see in classrooms around America. Do we have to read about one more school shooting, one more teen bullied to the point of killing herself, one more statistic about rampant teenage drug and alcohol abuse before we say, “Enough!”? Even if our own children escape unscathed–I consider my children who merely experienced anxiety to be among the fortunate– can Christians close their eyes to the masses of children hurt by this system? But I believe that it is less that we close our eyes and more that we are blind, because we were all educated in this very system. In order to answer bad philosophy, we must know it exists.

The loving, Christ-centered, disciplined and abundant learning environment at NCA pours on the “good philosophy” of the Gospel along with the developmentally appropriate mental rigor of Classical learning and a bounty of source texts to feed studentsʼ minds, reviving the real spirit of the Liberal Arts. If we believe, as Arthur Holmes asserts in The Idea of a Christian College, that “all truth is Godʼs truth,” then the whole business of education, the scouring of both sacred and secular for wisdom, becomes missional as students are “transformed by the renewing of their minds.” Social theorist Allan Bloom (a secular Jew) described liberal arts schooling like this:

True liberal education requires the studentʼs whole life be radically changed by it, that what he learns may affect his action, his taste, his choices, that no previous attachments be immune to examination and hence re-evaluation. Liberal education puts everything at risk and requires students who are able to risk everything.

Does this sound familiar? My Google search brought up 51 Bible verses pertaining to dying to self. Every true thought and idea is derived in some way from the depths of our Creator. Any curriculum that discounts truth will fail to lead students out of themselves. Even the Christian schools I have encountered simply overlay Biblical learning on top of a secular course of study, failing to change hearts and minds. I am convinced that students who complete their educations at NCA will not only be able to begin to “answer bad philosophy,” but will be in a unique position to begin positively affecting our culture, not only through their grasp of the true and the beautiful, but their ability to see beyond selfish aims.

I love the 2008 book by Andy Crouch called Culture Making. In it, we are reminded that the New Jerusalem is to be a city filled with the very best, most worthwhile and enduring elements of human culture coming together under the Lordship of Christ. Crouch maintains that Christians must not be content to simply critique and condemn the culture we find offensive and wrong. Neither should we throw up our hands, conforming to it or copying it, but we should become creators of new or revived culture to supplant the negative, broken and harmful. He reaffirms the Liberal Arts mission when he reminds us that “We cannot make culture without culture…(C)reation begins with cultivation–taking care of the good things that culture has already handed on to us.” But he cautions that we must proceed at this task with humility, not charging forth on our own to be “world-changers,” but, rather, asking:

Is the Maker of the world still at work “changing the world?” If so, what are the patterns of his activity, and what would it mean to join him in what he is doing?

I would like to suggest that He is at work, right here at NCA, and that you and your children have, at your fingertips, the opportunity to join in with the God of the Universe in this redemptive work.

But, it is we parents who must have the larger vision of what is happening here. Our students can glimpse it, but, as “no discipline is pleasant at the time, but painful,” we must be the ones upholding the final goal of a rigorous education. My daughter may complain about homework (occasionally), but there is no doubt in her mind that her parents consider it to be of great value, so she carries on. American education tells us it is OK to live in a plastic house with empty rooms, but we Christians know better, and can see, if we look, that this approach starves the souls of our children and our nation. By joining in the mission here at Naperville Christian Academy we can choose to be the ones who, according to our gifts, take down the facade and build real houses suitable for dwelling. The choice is ours.

Enjoy the ultimate match of colors! 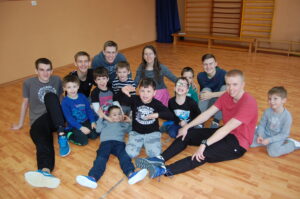